The THESAN project is a suite of large volume radiation hydrodynamic simulations that self-consistently model the reionization process and the galaxies responsible for it with unprecedented physical fidelity. In fact, from a numerical perspective THESAN provides higher resolution than previous simulations of comparable volume and employs galaxy formation models known to produce physical properties in concordance with observations down to the present-day Universe. Such an approach is ambitious but essential to push the frontier in our understanding of the intergalactic medium and its connection to galaxies during the first billion years after the Big Bang. The following sections include non-specialist and technical introductions to the simulation suite focusing on the unique aspects and central scientific themes of the THESAN project.

Numerical simulations have risen to be a third pillar of research in the last few decades, flanking theoretical and experimental (or observational) efforts. They are particularly relevant in astrophysics because nature prevents scientists from performing controlled experiments due to the large distances, physical sizes, long timescales, or extreme densities and energies involved. In fact, in cosmology the experimental setup cannot be altered as it coincides with part or all of the Universe, a disadvantage that is partially alleviated by the wealth of passive observational data collected by telescopes and detectors across the electromagnetic spectrum. Thus, numerical simulations provide synthetic and controllable versions of the Universe that effectively allow astrophysicists to better understand reality by transcending it. The predictions derived from these virtual experiments are only as good as the physics incorporated into the simulations, which is where the strength and uniqueness of THESAN lies. Specifically, these simulations present novel opportunities to study the early universe by simultaneously including an advanced galaxy formation model, a self-consistent treatment of cosmic reionization, and a model for cosmic dust. Each one of these key ingredients is described in greater detail below.

In the aftermath of the Big Bang, the Universe was comprised of a hot dense plasma of matter and radiation. Cosmic expansion led to rapid gas cooling, with the cosmic microwave background (CMB) forever preserving the moments when electrons and protons recombined to form neutral hydrogen atoms. Throughout its infancy, the dim Universe then went through a process of structure formation induced by the growth of overdensities of dark matter, a still-unknown substance making up approximately 85% of the material in the Universe and only interacting through gravity. Galaxies started to form once rarefied gas could collapse into the central regions of dark matter halos. They then continued to grow and evolve according to the interplay between gravity, hydrodynamical forces, and feedback from stars.

Eventually, within the first billion years, a complex landscape emerged in which various astrophysical phenomena govern the motion and properties of gas, connecting a hierarchy of large to small scale physics throughout the Universe. In particular, countless stars act as cosmic furnaces to not only shine as bright lights that illuminate their surroundings, but also inject large amounts of mass and energy into the interstellar medium (ISM) of galaxies through radiation pressure, stellar winds, and supernovae explosions. Furthermore, across their lifetimes they also fuse lighter elements into heavier ones, which can then form complex molecules like cosmic dust, and even planets. Some of these stars became black holes or other exotic objects at the end of their lives. Finally, nearly every galaxy in the present-day Universe also contains a supermassive black hole that at times may have been active enough to influence the entire galaxy through their powerful energy production. 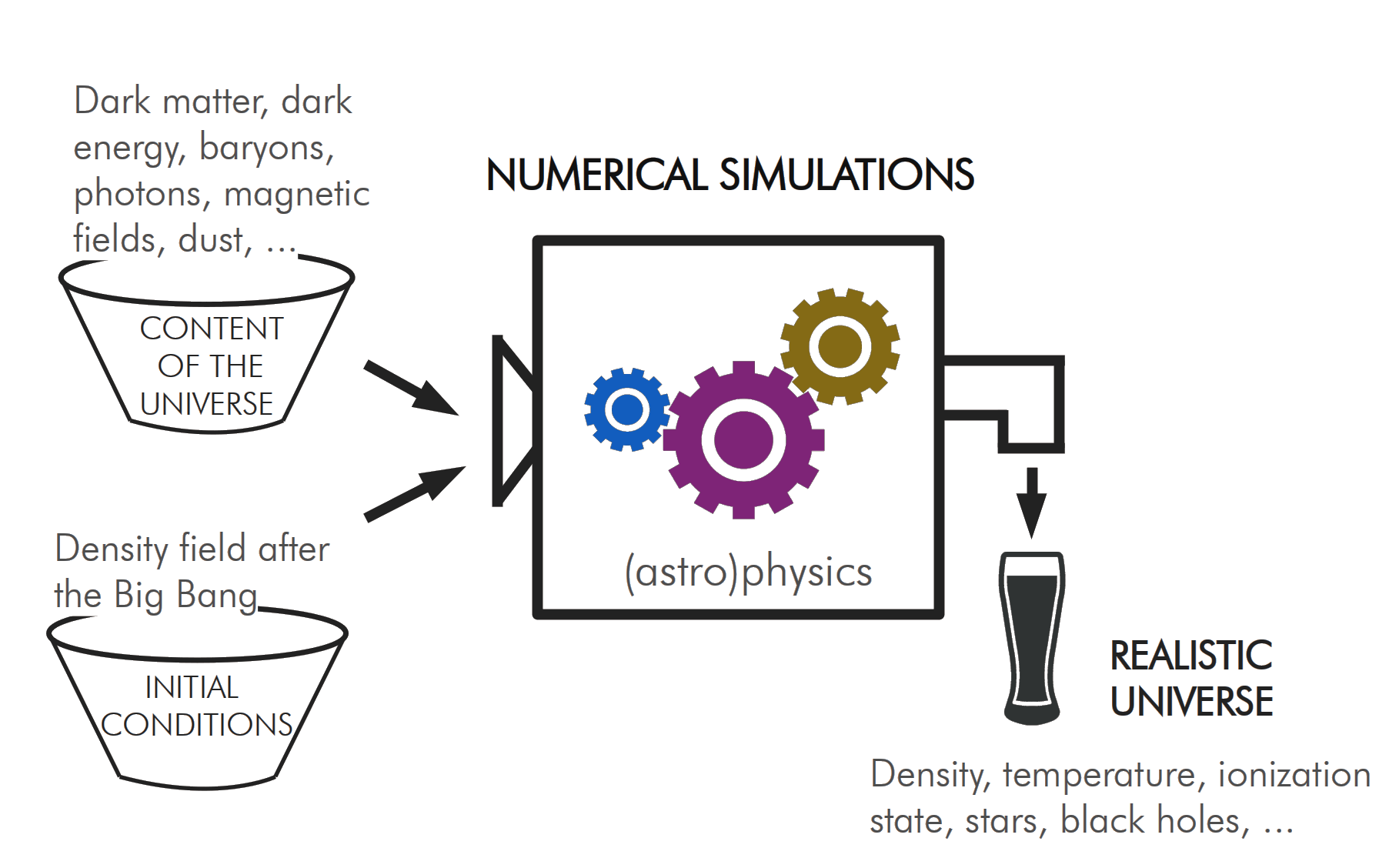 All of these processes are carefully included in the THESAN simulations. The gravitational and hydrodynamical forces are accurately calculated using the novel moving mesh approach with the AREPO code. The entire simulation volume is divided into approximately ten billion individual volume elements, which roughly follow the motion of the gas. In this way, they naturally cluster in regions of high density, where the resolution is needed the most as these are the epicenters of galaxy formation. The other processes mentioned above are implemented following the largely successful IllustrisTNG galaxy formation model, that was developed to produce realistic galaxy properties and populations in broad agreement with available observations of the local and high-redshift Universe. To make all of this possible, the simulations were run on one of the largest supercomputers in the world, the SuperMUC-NG machine at the LRZ (in Germany), employing nearly 30 million hours of continuous calculations distributed across almost 60,000 processors working together simultaneously.

Once the first stars — and subsequently galaxies — formed in the infant Universe, they began to pour large amounts of high-energy photons into the surrounding intergalactic medium. This gradually transformed the ambient neutral hydrogen gas into a hot highly-ionized plasma, a process known as cosmic reionization. Reionization represents the last phase transformation that the Universe went through and forever changed the stage upon which galaxies formed and evolved. Unfortunately, it is extremely challenging to gather data on this epoch as the large amount of time between us and when this transformation took place translates to truly astronomical distances. However, a detailed chronology and characterization of cosmic reionization will continue to emerge in the coming years.

The THESAN simulations are specifically designed to advance our knowledge regarding cosmic reionization. For this reason, they combine the realistic IllustrisTNG galaxy formation model with an accurate radiation transport algorithm to track the propagation of light from stars throughout the Universe. Given the colossal speed of light compared to typical gas motions, modelling radiation in dynamical simulations is one of the most challenging problems in computational astrophysics. However, this approach unlocks a new level of physical fidelity that is unsurpassed by other methods due to the combination of scales, resolution, and richness of physical processes explored. The THESAN simulations thus enable us to simultaneously investigate the formation of the first galaxies and their impact on the diffuse gas filling the space between them. Thus, THESAN provides an exquisite and invaluable tool for state-of-the-art scientific research, facilitating the interpretation of forthcoming data from current and upcoming telescopes.

The final novel ingredient of the THESAN simulations is the inclusion of cosmic dust, which renders this project even more unique within the landscape of astrophysical simulations. Cosmic dust indicates an ensemble of tiny grains of solid material that are formed in galaxies and are found between stars. One side effect is that dust locks a fraction of the atomic and molecular gases made from heavy elements into amorphous and crystalline structures, which can have an important impact on cosmic chemistry and cooling. Dust also transforms ultraviolet and optical light into lower-energy photons, thereby changing how radiation influences galaxy formation processes and in some cases allowing galaxies to shine brightly at infrared wavelengths. Thus, dust reprocessed light has recently become a powerful method for probing the properties of the first galaxies, and is rapidly providing a wealth of information about the conditions of the infant Universe. For this reason, although dust modelling in simulations is relatively new territory, self-consistently simulating this component is of primary importance to test our knowledge of the first galaxies with upcoming observations from increasingly powerful telescopes.

Gaining insights into the Epoch of Reionization has proven to be quite challenging because even the deepest Hubble Space Telescope (HST) observations are only able to detect galaxies during the late stages of reionization. Observations of high redshift quasars have provided insights into the state of the large scale intergalactic medium (IGM), as well as important constraints on the duration of reionization. Unfortunately, it is quite difficult to build an overall picture of the state of the IGM using the information coming from individual sight-lines to quasars alone. However, the state of the field is about to change due to a suite of instruments and telescopes that will become available in the next few years. For example, the James Webb Space Telescope (JWST) with its large mirror and infrared frequency coverage, will enable the discovery of fainter and higher-redshift galaxies and constrain their rest-UV/optical emission. Additionally, the fragmented view of the IGM will soon be replaced by a more complete picture of the neutral hydrogen distribution in the Universe by current and upcoming 21 cm line intensity mapping (LIM) experiments like the Low-Frequency Array (LOFAR), Hydrogen Epoch of Reionization Array (HERA), and Square Kilometre Array (SKA). In a similar vein, there are plans to use LIM of spectral lines originating from many individually unresolved galaxies to faithfully trace the growth and evolution of large-scale structures. These advancements will unleash a flood of high-redshift observational data that promises to usher in a new era of cosmic reionization studies. The THESAN simulations have been specifically designed to fully exploit the upcoming observations by making accurate predictions of the large-scale reionization process and resolved properties of the sources responsible for it.

We outline below a few of the key science areas that motivated the THESAN simulations: 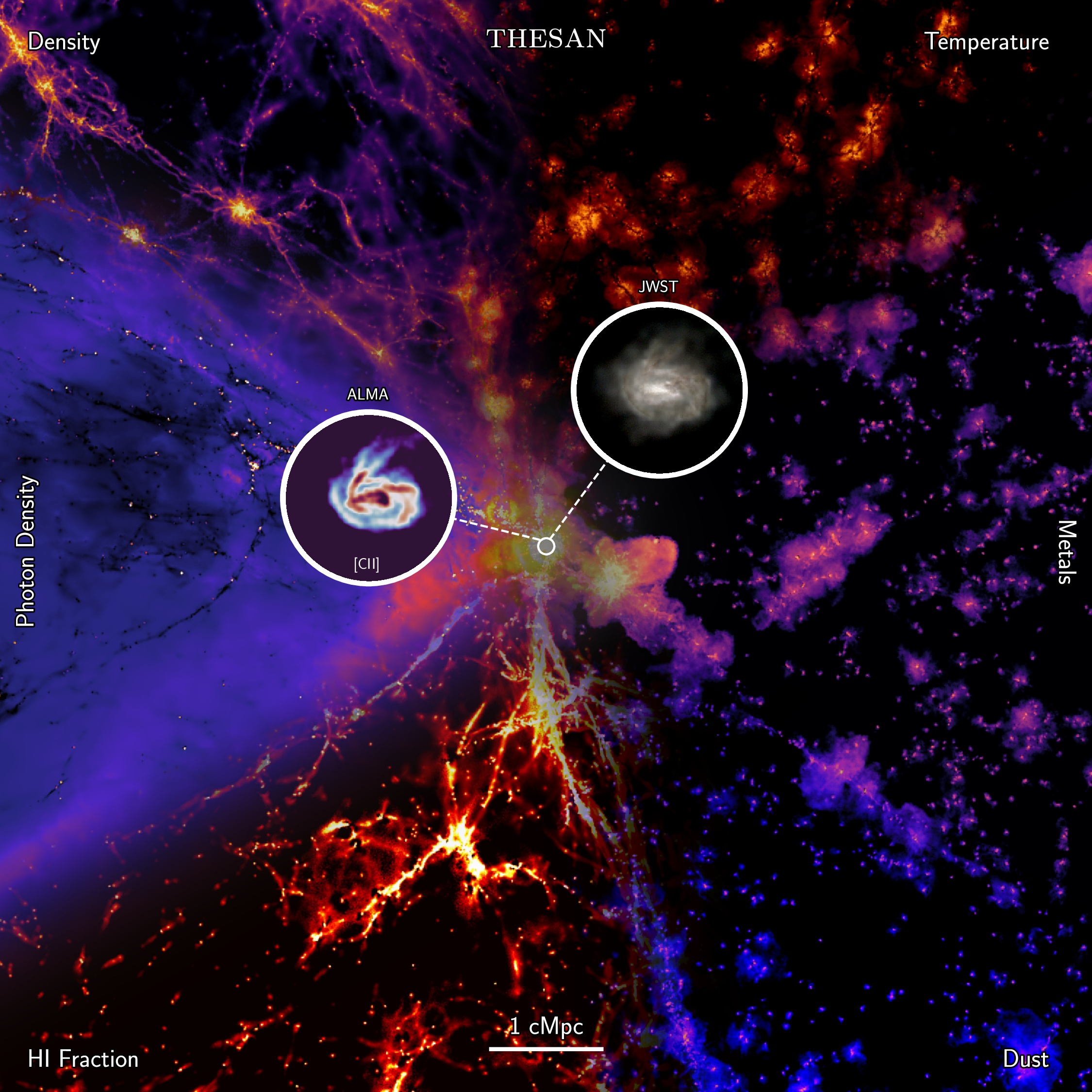 The THESAN simulations follow the coupled dynamics of dark matter (DM), gas magnetic fields, and radiation with the efficient quasi-Lagrangian code AREPO-RT. It solves the (radiation-magneto-) hydro-dynamical equations on an unstructured mesh, built from the Voronoi tessellation of a set of mesh-generating points which follow the flow of gas. A quasi-Lagrangian solution to the hydrodynamic equations is achieved by solving them at interfaces between moving mesh cells in the rest frame of the interface. Gravity is solved using the Hybrid Tree-PM approach which estimates the short range forces using a hierarchical oct-tree algorithm, while the long range forces are computed using the particle mesh method in which the gravitational potential is obtained by binning particles into a grid of density values and then solving the Poisson equation using the Fourier method. We outline several numerical aspects below:

Figure: Global properties of the IGM in the THESAN simulations, compared to observations. From left to right: volume-averaged hydrogen neutral fraction evolution, volume-averaged temperature at mean density evolution, and CMB Thomson optical depth as a function of maximum integration redshift. The bottom panels show the variance around the THESAN-1 curve, computed by subdividing the original box into 8 (inner shaded region) and 64 (outer shaded region) sub-boxes. The THESAN simulations agree well with available data.

We highlight here a few of the early science results from the first THESAN papers:

This work is licensed under a
Creative Commons Attribution 4.0 International License.